Celebrate the Mid-Autumn Festival the traditional way with these mooncake pastries of decadent sweet bean and lotus seed paste, enclosed in an envelope of soft pastry.

Falling on the 15th day of the eighth month of the lunar calendar (which changes each year!), Mid-Autumn Festival (中秋节 zhōng qiū jié) is celebrated by a host of East and Southeast Asian communities. The festival stretches back 3000 years to the emperors of the Shang dynasty. On this day, the moon was thought to be at its brightest and roundest and thus was worshipped for its fruitful harvests.

This holiday is commonly regarded as the second-most important cultural celebration, following Lunar New Year, and is commonly celebrated with friends and family enjoying offerings of mooncakes.

The Legend of Chang’e and Yue Tu

In addition to celebrating the harvest of wheat and rice; in China, offerings were also made to the mythical moon goddess, Chang’e (嫦娥 Cháng’é).

Ancient legends have it that there were once 10 suns in the sky. The heat was unbearable, scorching the earth and making it infertile. An ancient hero called Hou Yi (后羿 Hòu Yì) shot down 9 of the suns using his excellence in archery and in turn, was rewarded the pill of immortality by the gods.

Not wanting to outlive his wife, Chang’e, Hou Yi did not consume the pill. However, whilst out hunting, one of Yi’s apprentices, Feng Meng (逢蒙 Féng Méng) attempted to steal the elixir and, in self-defence, Chang’e consumed it. She flew to the sky and resided on the moon. In her memory, Yi would make sacrifices and offerings to his wife of her favourite cakes and fruits.

Whilst originally alone, Chang’e is accompanied by a rabbit (月兔 yuè tù meaning the moon rabbit). When three divine beings descended on earth in the guise of beggars, the rabbit, unable to gather any food for them, jumped onto a fire and offered itself to the men. Touched by his selflessness, the deities rewarded the rabbit as immortal, and he now lives in the Moon Palace with Chang’e, making immortal medicines for those in heaven. He is also known as the jade rabbit (玉兔 yù tù) for his smooth, white fur.

Whilst based on a pareidolia observation of markings on the moon, an image of the rabbit and its mortar can be seen! Interestingly, in Korean and Japanese mythology, the moon rabbit does not make medicine but instead pounds mochi in his mortar. In fact, stories of a rabbit on the moon were also told by native Americans and Aztecs!

The Baiyue peoples, an ethnic group that dominated south China and north Vietnam in the first millennium BC to the first millennium AD, did not celebrate the moon in any form. Instead, during the Mid-Autumn Festival, they gave thanks to a dragon who they believed brought rain to their produce.

Likewise to the husband of the moon goddess, people celebrate the Mid-Autumn Festival with mooncakes and pomelo, a large citrus fruit, related to the grapefruit. Pomelo is harvested during the festival and is considered to be the goddess’s favourite fruit.

It is also common practice to light up houses and public streets with lanterns, traditionally handmade with paper. These symbolise prosperity and good luck.

Traditionally, mooncakes are a pastry with a thin, soft crust, filled with sweet bean or lotus seed paste. They sometimes contain a salted duck egg yolk or two to symbolise the full moon.

They are also open to regional differences. In Beijing, delicate red bean fillings prevail whereas Cantonese mooncakes may be filled with meats. In Ningbo, spicy and salty flavours with the inclusion of seaweed or ham are commonplace. Sometimes the outer crust may also differ, such as in Shanghai, a shortcrust pastry is used.

Contemporary mooncakes come in all shapes and sizes, with varying crusts and fillings. Taro, matcha and custard are particularly popular fillings, as well as the introduction of snow skin mooncakes made of glutinous rice, similar to mochi.

Due to China’s large sphere of influence, big brands like Oreo, Starbucks and Haagan-Dazs also have their own takes on this classic bake. 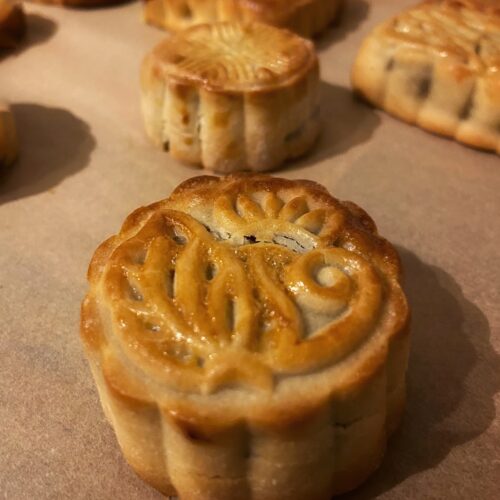 * For more information on mooncakes, Chang'e or the Moon Rabbit. * Recipe by my mom. * Photos by me.
Keyword cake, dessert, festival, lotus seed, red bean

Still hungry? Check out these posts…