A delicious fusion of American ingredients and Korean flavours, budae jjigae is a rich and spicy stew, sure to warm you up even on the chilliest of nights.

As we are approaching October, the nights are getting colder as the leaves are turning to gold. It is therefore only appropriate that my natural response to such is that it is stew season! Now tell me, who does not love a good stew? Tell me!

Budae jjigae (부대찌개) is a deliciously aromatic stew from South Korea. From the Korean word budae, meaning army base, and jjigae, the word for stew, it was created in 1954 following the end of the Korean War. During a time of food scarcity, individuals would search these American army bases, retrieving soldiers’ rations of spam, baked beans, and other processed foods. Koreans would then combine these foreign ingredients with familiar flavours of kimchi and gochujang to make a hot and spicy stew, more suited to their tastes.

Whilst Korea has since experienced rapid growth, this dish also grew in popularity nationwide. American army bases were originally stationed in the city of Uijeongbu, northeast of Seoul, and it was here that the first budae jjigae was stewed. American items were once made illegal throughout Korea and could only be purchased through the black market; but with the surplus of supplies, they were circulated nationwide. In reflection of such times, there are now multiple restaurants throughout the country dedicated to making the dish, with some of the most famous on the budae jjigae street of Uijeongbu.

Whilst the inclusion of processed foods may not be to everyone’s tastes, I can assure you that this dish is really hearty and satisfying to eat. Created using pantry items and products on hand, budae jjigae is open to countless variations, making it delicious and highly adaptable, perfect for a quick fix, or for sharing with friends.

Popular American ingredients include baked beans, ham, hot dogs, bacon, and processed cheese. Korean influences can also be seen in the base, typically made of an anchovy broth flavoured with gochujang (red chilli paste), garlic, and kimchi. Although traditionally made with meat, a vegan, meat-free alternative can be achieved with the inclusion of instant noodles, tofu, and tteok (rice cakes), as well as mushrooms and other seasonable vegetables.

No matter whether you dine out or make it yourself, budae jjigae is sure to be packed with an array of textures and tastes, as well as all of your favourite carbs (or at least mine!). 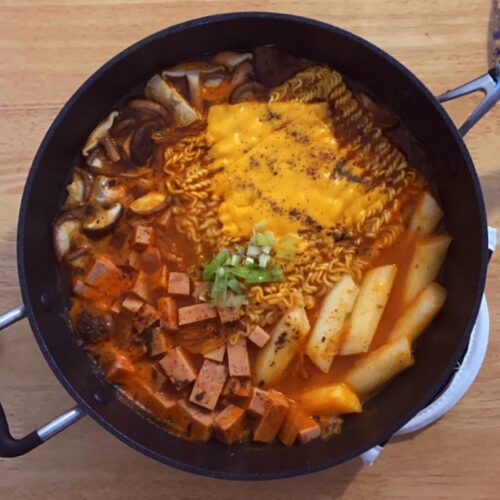 Still hungry? Check out these posts…